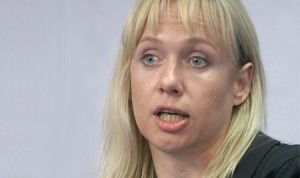 In 1994 - 1999 years. He held the positions of loan officer, deputy head of department, deputy head of the Office of collateral, the expert department of the Board of return Banking Corporation "Inkom" troubled assets.

In 1999 - 2004 years. - Head of Department, Deputy Director of the Asset Management Department of the NGO "Agency for Restructuring of organizations."

From 2004 to 2006. He served as deputy director of the Department of Organization of deposit insurance, the Deputy Director of Asset Management Department of State Corporation "Deposit Insurance Agency".

From April 2006 - Deputy Chairman of the Board of OJSC "Russian Bank for Development".

In 2007, Svetlana Sagaidak awarded the academic degree of candidate of economic sciences.

Since February 2008 - the director to work with small businesses Department of OJSC "Sberbank of Russia".

In June 2009, she was appointed as Director of the Office of the distressed assets of the Savings Bank.

On February 26, 2016, she performed the duties of head of unit "International Operations" of the Savings Bank Supervisory Board before the decision on its inclusion on the board.

From April 2016 - Member of the Management Board, Sberbank Deputy Chairman of the Board. Head of Unit "International Operations".

She was awarded the Order of Honor, the Medal "For Service to the Motherland» II degree. It noted the gratitude of the Government of the Russian Federation for his contribution to the development of banking and many years of diligent work.

The story of the illegal arrest of the Director General of the holding company "Energomash" Alexander Stepanov gradually acquires new details. Recall that in early February, the Tver Court of Moscow has decided to arrest Stepanova - in this case the entrepreneur has not yet been charged with any formal charges. According to investigators, the head of "Energomash" involved in the illegal acquisition of the Savings Bank of the Russian Federation the loan in the amount of 12.7 billion rubles included in "Energomash" structure of "GT-TEC Energo".

Prosecution Alexander Stepanov was initiated at the personal request of the head of Sberbank German Gref, which in itself is surprising, since earlier German Gref has already transferred all powers to collect debts from Stepanov's head of "Savings Bank - Capital" Ashot Khachaturyanets.

... Secondly, according to Stepanov himself to his lawyers, the arrest was preceded by several meetings, each of which was accompanied by extortion and threats of arrest in the case within a month extortionists conditions are not met. In parentheses we note that it happened.

The first meeting took place in his office at Stepanova. It was attended by the director to work with troubled assets "Savings Bank" Svetlana Sagaidak, as well as deputy head of Sberbank Dubin Paul. These leaders immediately said Stepanov that operate private instruction German Gref. As later he told his entourage Stepanov, from him $ 100 million was required at this meeting and 75% in cash, "Energomash" shares in exchange for a cessation of the persecution. In addition, the businessman offered to convey two key factory of GTZ-Energo personally Sergei Kiriyenko, the head of the state corporation "Rosatom" without any money. Recall that "Rosatom" is considered the main contender for the "Energomash" assets.

The criminal case against three employees of OJSC "Sberbank", suspected of commercial bribery and fraud, may possibly lead to new investigations against senior managers of the bank.

Ordinary employees who offer the borrower the Savings Bank to liquidate the organization claims to 700 million rubles for only 100 million rubles, "hands on", started to testify on their leaders.

From published on the website of the summary statement of the Savings Bank should be the suspects in a criminal case "financial damage caused to the bank does not." However, this investigation may result in the bank and some of its senior managers are very unpleasant consequences, and without losing money.

The fact that caught red-handed for financiers to mitigate the possible sentence is actively cooperating with the investigation. According to rumors, the suspects had already testify on his head, the director of department on work with problem assets of Sberbank Svetlana Sagaidak.

Rumor has it that Svetlana Sagaidak is directly related to the multi-million dollar fraud: that without its participation, this scheme would be unrealizable.

Well, true or not, to be seen detectives.

According to available information, Ms. Sagaidak is directly related to the history with 700 million. Rubles, and an attempt of illegal writing off of debt for 100 million. Without their participation, this scheme would be unrealizable. Obviously, references to Ms. Sagaidak, as well as other individual bank executives and some third-party commercial structures apply to other episodes. Apparently, the detainees managers Sberbank zealous in cooperation with the investigation and provide redundant information about their colleagues and managers, thereby urging law enforcement agencies in their complete loyalty.

It should be noted that Svetlana Sagaidak transferred to Sberbank of the Russian Bank for Development under the patronage of the deputy of the State Duma of the Russian Federation Gleb Hora (in the Duma of the current convocation of the first deputy chairman of the Committee on Budget and Taxes, is a political council of "United Russia"), with whom her husband Mr. -zhi Sagaidak had a joint business. Arriving in 2008, the Savings Bank as Head of Department on work with small businesses, already in June 2009 Svetlana Sagaidak was transferred to the post of Director of the Department for Work with problem assets. According to some reports, Ms. Sagaidak mentioned in the investigative materials in connection with its work on the current position.

Speaking about the scale raider scandals in which "lit up" Mrs. Sagaidak, we should mention the story when Sberbank suffered the former owner of CJSC "Alteks - a group of companies" Doctor of Economics, professor and entrepreneur Andrew Gorodnov. He has publicly stated that "raider seizure" of its holding Sberbank, and that it was a criminal case is under pressure from the bank!

By the way, some of the media claim that the director to work with troubled assets "Savings Bank" Svetlana Sagaidak prepared a letter to the then German Gref, the head of Ministry of Internal Affairs Rashid Nurgaliyev with a request to initiate criminal proceedings against "Alteks" manual.

German Gref may resign as the head of the Savings Bank in the near future. His place is likely to take senior vice president of Sberbank Svetlana Sagaidak, reported correspondent The Moscow Post by independent experts. In the business community, Ms. Sagaidak associated with numerous corporate raids.

Chairman of the Board of Directors of SB JSC «Sberbank» was appointed deputy chairman of the parent bank in Russia Svetlana Sagaidak, said Wednesday the site of the Kazakhstan stock exchange KASE.

In 2008, he started working in PJSC Savings on office management director to work with small businesses. In 2009-2011 he served as vice president and then director to work with distressed assets management PJSC Sberbank. "Corporate Business" was the Senior Vice President of Sberbank, the head of the unit from 2013. October 12, 2015 was appointed to the Board of Directors of JSC "Corporation" SMEs ". At the beginning of March 2016 was approved by the deputy chairman of Sberbank Russian government.

For the majority of high-profile and not the stories is the deputy chairman of Sberbank Svetlana Sagaidak. A few years ago she led the bank department on work with problem assets. And in fact the owner of "Amurkabel" Constantine Vachevskih her direct reports showed itself in all its glory, and did not hesitate even before the capture of the business also require him to transfer a large sum to the account controlled by their offshore companies.

After the arrest of Konstantin Vachevskih available Sberbank Russian property was put up for auction - sold out the latest imported equipment, commodity collateralized by. It is brought about 80 million rubles as guarantors of the ill-fated loans. Thus, the damage to the bank repaid. However, the plant is still frozen, arrested all the property, and its former owner is still in prison.

Sberbank top managers want to take the case to the last cartridge. And Svetlana Sagaidak again not in the business, but through Deputy Gref in Cyprus, where the need to transfer kickbacks, such as Vachevskih, according to some, may be under the control of it to her.

During negotiations extortionists advanced merchant requirement that the "rollback" in the amount of 100 million. Rubles, in three tranches should be transferred to the account of the Cyprus Zytec Limited, controlled by employees of the Savings Bank.

Instead, Mr. Vachevskih debt was reduced by 52% and passed under his control companies "Lyuandr". And most of the money Pohlebin demanded, according to investigators, to transfer to the meeting of the Savings Bank of troubled assets Committee, scheduled for August 9, 2012.

At this meeting the question of the settlement of the debt Vachevskih Constantine was supposed to be definitively resolved.

However, according to the investigation, to fulfill the promise of the businessman "solution to the problem debt" effort only Pohlebina and Konica was not enough. But then who actually takes the final decision on the matter ?! And th in this case, in fact, belongs to the offshore Zytec Limited, which was pumped through "kickbacks"?

Rumor has it that the main role in this case played a former boss Vyacheslav Pohlebina Svetlana Sagaidak! It seems, according to Stringer site, one of the "patrons (extortionists - Ed.)" May be the director to work with troubled assets "Savings Bank" Svetlana Sagaidak which German Gref has delegated control over "Sberbank Capital" - "daughter" banks involved in the collection of debts and the relationship with the "problem customers".

Of course, that all the strings from Svetlana Sagaidak drawn to German Gref himself, so he has a real reason to fear imminent arrest!

Moreover, it was Svetlana Sagaidak can actually control Zytec Limited, or even be the ultimate beneficiary of the offshore company.

The conflict between the JSC "Kuibyshev" (KuAZ) and Sberbank of Russia continued in court. Experts believe that the Savings Bank with the "credit schemes" could lead to 1.7 billion rubles to deal with KuAZ.

Rumor has it that the conclusion to 1.4 billion rubles may be involved in the Savings Bank Senior Vice President, Head of unit "Corporate business" Svetlana Sagaidak, which has already been seen in the attacks on businessmen through the regional framework of the Savings Bank.

Economists believe that as Sagaidak deals with a "troubled borrowers", it could not have been unaware of the situation with the actions of management and KuAZ Volga bank. So, perhaps, it was she and coordinated withdrawal of KuAZ assets.