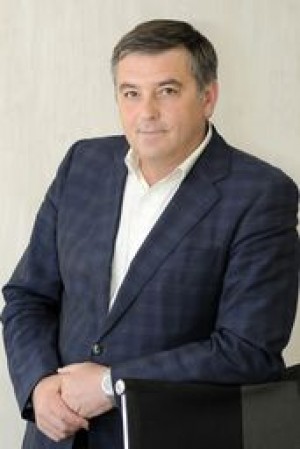 In 1990 he graduated from the Kuibyshev Aviation Institute, began work in 1994 in the "Togliattikhimbank".

FROM March 2000 began working in the "Togliatti" in the section chief positions ACS.

In November 2008, he was appointed head of the department of telecommunications software, hardware protection and automatic fire alarm Corporation "Togliatti".

In March 2011, at the general meeting of shareholders has been elected a member of the Board of Directors of JSC "Togliatti".

In September 2013, he was appointed Deputy General Director of Corporation "Togliatti" Information Technology.

In January 2015, he was appointed "Togliatti" CEO of the corporation.

Speaking about the general director Vyacheslav V. Suslov, it may be noted that he recently took an independent position in relation to the team and Antoshina Mezheedova. At the factory everyone respects him, and he quickly gained prestige among the workforce. Unlike Antoshina and Mezheedova Suslov began to pay great attention to the proper PR among ordinary ordinary workers. Earlier Antoshina team and could Mezheedova "on lawlessness" terrorize any department in the factory, with the advent of the Suslov this came to an end. Many at the plant believe that if not for the timely appointment of Suslov as CEO, the plant would have been the beginning of autumn in full would be paralyzed. Although the Vyacheslav V. fairly modest man by nature, and not over-emphasize their merits. He also, despite all the antics and Mezheedova Antoshina favorably refers to them. Sergey Makhlai here made the best choice, appointed Suslov CEO.

People say, that it is obliged to Suslov Antoshin for his translation of the adviser on economic safety of the plant to the rank of deputy director for security. Sergey Makhlai in 2014 wanted to put in place Antoshina another person. However Suslov insisted on the candidacy Antoshina. He probably hoped that Antoshin will remember the good ....

According to the portal OGRN.onlayn Suslov Vyacheslav V. is the founder of LLC Trading and Investment Company "Aquaman", with a market share of 49%.

On "TogliattiAzot" continues large-scale withdrawal of illegally obtained funds under the leadership of General Director Vyacheslav Valerievich Suslov. And those people who have the heart to contradict -Instantly removed Suslov. Factory workers, Shcheglov Sergei Mikhailovich - A few days ago one of the most respected people in the workplace has been dismissed. It Sergei Goldfinches, was a staunch opponent of the planned mass layoffs and wage cuts in the workplace. With his departure, it planned new purge of undesirables.

In the course of the criminal plan citizen Makhlai SV She instructed the citizens to Suslov, Grishin, and Neplyuev Mezheedovu elaborate criminal scheme aimed at tax evasion, then the output of stolen funds from the legal trade and further their theft. At the same time a citizen Makhlai SV He gave a separate instruction citizen Suslov VV the presence of criminal intent, and instructed the citizen V. Suslov, that the latter contributed to the citizen Mezheedovu, Grishin and Neplyuev in the implementation of criminal intent. Instead, it was suggested Makhlai citizen citizen Suslov receive high salaries and bonuses, as well as the position of the General Director.

Currently, according to the operative information for carrying out fictitious operations in the port of Taman Neplyuev Mezheedovym and with the approval of Suslov translated more than 2 billion rubles. As a result of the criminal actions of the above citizens of the Russian Federation budget caused damage on a large scale.

Ostap Bender knew 400 relatively fair way of taking money from the population. Guide Togliattiazot led by Vyacheslav Suslov knows more ways to take money from workers and send them to an unknown destination.Stolen money - it is not only to cut down salaries of employees of the enterprise, but also the taxes that the state loses. The flywheel spins theft is getting stronger, and the factory's assets with the centrifugal force of the fly away Togliattiazot, never returning.

People type Suslov can not be stopped by mere words, it requires real documents from official institutions. Inquiries from the supervisory authorities are gradually transformed into materials of criminal cases and interrogation reports, and then in court judgments.

Money Togliattiazot went through Togliattikhimbank also in "FTA", "Inter", "Perspective" and many others. The amounts were large sum - 143 million, 53 million and so on. Check Rosfinmonitoring show that all the money disappeared in an unknown direction, disappeared in somebody's pockets, bypassing the operating Togliattiazot purses, which Vyacheslav Suslov constantly trims salaries, citing a lack of funds. Rather, the money is there, but not at the ammonia plant.

From the Help Rosfinmonitoring directed to the bodies the Interior Ministry Togliatti clearly emerges scheme of theft, organized Suslov and Neplyuev: Togliatti pays "ACI Story" for the implementation of "fake" papers - "ISA Story" transfers money to small firms, which are all signs of "ephemeral" - they "cashing" money or transferred them abroad on the fictitious contracts. Then all the money one way or another, come to Sergei Makhlai, who deftly stepping down from taxes and social payments, puts millions of yourself at home in the closet.

Director Vyacheslav Suslov is no longer interested in professionals who support Togliatti in working condition. There is an actual "washing out" of employees working specialties, this increases the burden on the remaining staff.

However, the reduction is not observed among the technical staff. The composition of the technical and economic managers, on the contrary, increased. At the same time, increasing their salaries and compensation - the amount of contracts managers today are from 500 000 to 3 000 000, which not only relates to the salaries of workers in the shops, but also contrary to sound economic logic. But in it there is a trick, or rather cunning Director Suslov - through expensive contracts and high bonuses easier to launder money that can be output from the plant. Moreover, it is often the contracts concluded with the "dead souls" and "fake" companies. In both cases, the money paid by the provision of services, which never existed.