Leonid Slutskiy Chairman of the State Duma International Affairs Committee, a member of the LDPR faction 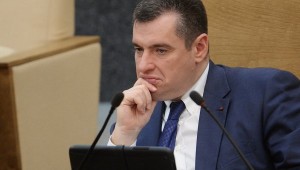 He graduated from the Moscow Machine Tool Institute.

In 1996 he graduated from the Moscow Economics and Statistics Institute (MESI). Doctor of Economics (Thesis "Development of small business in modern Russian economy", 2001). Was Komsomol.

From 1988 to 1989 - deputy secretary of the Komsomol Committee of the Institute.

From 1990 to 1991 - Head of the Department of the Presidium of the Supreme Soviet of the RSFSR apparatus.

In 1990 he was appointed head of the innovation sector of the Supreme Soviet of the RSFSR.

On 12 February 1991 to 27 June 1992 - Advisor to the Executive Committee of the Russian Union of Industrialists and Entrepreneurs (RSPP).

Since 1 January 1994 to 12 August 1994 - Head of the Secretariat of Deputy Chairman of the State Duma of the first convocation.

He worked as a consultant for the Independent Association "Civil Society".

In January 1999, he became a member of the Interbank Association of the investment board of directors of "Commercial banks in the region" Investkredit ".

In 1999 - member of the Presidium - Independent Consultant Association to support the development of civil society.

19 December 1999 was elected to the State Duma of the third convocation on the federal list Zhirinovsky Bloc.

On January 26, 2000 - Deputy Chairman of the State Duma Committee on International Affairs.

Since 2000. and is currently the deputy head of the delegation of the Federal Assembly of the Russian Federation to the Parliamentary Assembly of the Council of Europe (PACE), in January 2012, Deputy Chairman of the PACE.

Until 2012, he was the coordinator of the parliamentary group for relations with the Parliament of the French Republic.

Head of the Department of International Relations, Moscow State University of Economics, Statistics and Informatics.

Co-Chairman of the Presidium of the National Fund "Public Recognition", an independent organization "Civil Society" and the National Civil Committee for Cooperation with law enforcement, legislative and judicial authorities.

Has Thanks the Chairman of the State Duma.

Awarded the Certificate of Merit of the Federation Council, the Honorary Diploma of the State Duma.

In 2008 he was awarded the Order of Friendship for his contribution to strengthening international cooperation, rapprochement and mutual enrichment of cultures.

Legion of Honour (2006). - The highest French award - for the development of parliamentary relations between Russia and France and active peacemaking, Grimaldi Order (2007.) - The highest award of the Principality of Monaco - for their active contribution to the development of inter-parliamentary relations, the Order of Friendship (Azerbaijan, 2010 )..

Cavalier of the Golden Badge of Honor "Public Recognition".

He is fond of ancient history and travel.

He is married and has one daughter.

Ministry of Finance in 1992 was financed from the state budget the construction of access roads to the partnership "Springs", writing off the cost of "agricultural development" (Deputy Minister of Finance Holovaty AI and former Minister of Economy Nechaev AA fellowship members) .

Russian Vnesheconombank (VEB), represented 6anka management, highlighted the partnership ruble loan in the I billion rubles (loan agreement № I53 / 3I05 / 93 from 25.08.93 was) for a period under 20% per annum for three years (at the time the conventional rate was 180). Direct talks with the leadership of EBV were Slutsky and Guryashin. Slutsky as a "response," offered his services to address the issue of granting VEB the building Kopevskomu lane. (VEB Chairman Poletaev OY is a member of the garden community "Springs").

Construction site of gardening association guarded round the clock by armed units -OMON Moscow Police, selected by direct order Pankratova VI (Pankratov VI is a member of the partnership).

Yesterday the Public Chamber was to make public a list of the most hard-core truants in the State Duma and the Federation Council, but was limited to the statement, without naming specific names: the problem of absenteeism has become a system, its solution lies in the legal plane, and therefore pointless to publish the list of names, according to the text of the document.

A revised list was ready by 1 June, he said a member of the Public Chamber, it was listed in a little more than 10 names of deputies and senators. In the list of Senators Suleiman Kerimov, Sergei Pugachev and the former head of traffic police, Vladimir Fedorov, deputy-United Russia ballerina Svetlana Zakharova and co-owner "Metalloinvest" Andrei Skoch, Communists, Vladimir Ulas and Svetlana Savitskaya, a deputy from the Liberal Democratic Party, Leonid Slutsky, said a source in the working group dealing with investigation.

The deputy chairman of the Duma committee on international affairs Slutsky admitted to "Vedomosti" that does not appear often: "I go to meetings only when I report itself, but deputy efficiency of the international committee is not measured by hours spent in the room." Slutsky explained that it is often on business trips, in the region and no claims in a fraction of any committee to him there. Fedorov denies that is rare: "I am the official and well understand the need to regularly attend the meetings."

The leader of the Liberal Democrats Vladimir Zhirinovsky has promised to punish his colleague from the Liberal Democratic Party Leonid Slutsky, who arrived at the Trinity-Sergius Lavra by helicopter. This dramatic statement of policy made in an interview with radio "Komsomolskaya Pravda".

In particular, Vladimir Zhirinovsky said: "This is, I think, unseemly act but he is very pious man ... In any case condemn its behavior and oshtrafuem inner-measures.".

Despite the scandal erupted, Bishop of Arkhangelsk and Kholmogory Daniel told reporters that Slutsky did not have time to meet with Russian Patriarch Kirill. According to him, the people's choice, "apologized to the saints (and got it) and all those present", in addition, he "sought forgiveness and St. Sergius, the founder of the monastery in prayer from his holy relics."

According to our source in the security services, the very incident occurred early in the morning of June 1 during the special operation, which was conducted by the Ministry of Internal Affairs Goosby. On Rublevo Assumption highway, they stopped by the crew of the Moscow STSI (state number A1033 99) with the included "beacons" of: the driver of the 9th department of the STSI of Moscow Vitaly and Sergey Kozhevnikov Plyusnina inspector. To the surprise of a special person in the car was a State Duma deputy from the Liberal Democratic Party, Leonid Slutsky.

To explain their presence in the official vehicle traffic and people's representative refused, citing parliamentary immunity, disappeared in an unknown direction (by the way, has the declared Slutsky mansion in DSK "Spring" - just on Rublevo-Uspensky highway).

We managed to find out where such a hurry MP Slutsky, it turns out, he is part of the official delegation of the Russian Orthodox Church with the Patriarch Kirill was supposed to fly from the government "Vnukovo-3" airport in Mount Athos (Greece).

According to the head of the CIS Affairs Committee Leonid Slutsky, the parliamentarians recognize the right of the Crimean people to raise those questions that they consider necessary, while at the same time, all Duma factions spoke in favor of preserving the integrity of the territory of Ukraine.

However, the words of his fellow party member Leonid Slutsky has denied the head of the Supreme Council of the Liberal Democratic Party, Igor Lebedev, stressing that Slutsky expressed only the opinion of its Committee. "The Chairman of the CIS Committee Leonid Slutsky stands for integrity of Ukraine, it is contrary to the position of the party and faction. We were and are in favor of joining the Crimea to Russia ", - quotes Lebedev, RIA" Novosti ".