Alex Dyumin Acting Governor of the Tula region from February 2, 2016. 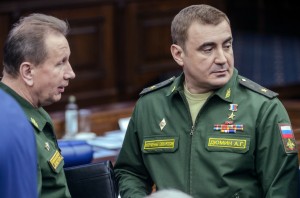 In 1994 he graduated from the Voronezh Higher Military Engineering School of Radio Electronics. It was distributed in the Moscow Military District, a small military unit, which was engaged in counteracting technical means of enemy intelligence.

In 2009, the Russian Academy of Public Administration under the President of Russia defended his thesis on "Political aspects of global governance in the framework of cooperation between the countries" group of eight "" Political Science.

In 2012 - Deputy Head of the Security Service of the President of Russia Russian Federal Security Service. In September 2012, accompanied by Russian President Vladimir Putin during his official visit to Kyrgyzstan.

In 2013 - he passed the professional training at the Military Academy of the General Staff of the Russian Armed Forces.

In 2014 - the deputy chief of the GRU, Russian special forces commander of operations, which have played a key role in the operation of the Crimea to Russia, what they say in the film "Crimea. Way home "Andrey Kondrashov.

December 11, 2015 was awarded the rank of lieutenant general. December 24, 2015 decree of President Vladimir Putin, Lieutenant-General Alexei Dyumin was appointed Deputy Defense Minister Sergei Shoigu and became a member of the Collegium of the Ministry of Defence. In this position Dyumin oversaw the military training. January 29, 2016, he handed a personal standard.

Playing in amateur hockey, usually as a goalkeeper. As an adviser included in the leadership of the hockey club SKA, whose president is Gennady Timchenko.

Younger brother - Artem Dyumin, runs of "TPK" Prodmarket "" (a single contractor and builder of the hotel "charges") and LLC "Turbo" (one of the shareholders' ProdMarket "), with the April 2014 headed" Olympic ".

Medal of the Order "For Services to the Fatherland» I degree

Medal "In Commemoration of the 1000th Anniversary of Kazan"

Medal "For the Return of Crimea" (Russian Ministry of Defense)

The medal "For Military Merit" (FSO)

Medals "For Distinction in Military Service"

According to a source, "Kommersant", close to the General Staff, General Dyumin cope with the task, "just brilliant". In particular, according to the interlocutor, "Kommersant", it was under his guidance has been developed and carried out on the night of February 23, 2014 emergency evacuation of the ex-President of Ukraine Viktor Yanukovych to Russia: security services were ready to evacuate its air, sea or by land. This was immediately reported to Vladimir Putin, praised the actions of subordinates Alexei Dyumina. Subsequently, he received the expected promotion: he was chief of staff and first deputy commander of land forces Oleg Salyukova.

Alex Dyumin served in the FSO, as deputy head of the Security Service of the President of Russia; He commanded the special forces of the Russian Federation operations which have played a key role in the operation of the reunification of the Crimea with Russia, what they say in the film "Crimea. Way home "Andrey Kondrashov. He has developed and conducted an emergency evacuation operation in Russia President of Ukraine Viktor Yanukovych during the night of February 23, 2014.

Unexpected Dyumina appointment to head the administration of Tula region, a region larger in area than Wales, was rated as Putin's desire to allow him to gain experience in political leadership in the province before the next rapid rise.

According to still other sources, our hero was in the Federal Security Service is not in the street - allegedly under the protection of his father, Colonel of Medical Service Gennady Dyumina, which was part of the 1990s, the inner circle of the Minister of Defence of the Russian Federation (1992- 1996), Pavel Grachev. Dyumin Sr. was a sparring partner for tennis defense minister and served as Deputy Head of Procurement of the Central Military Clinical Hospital. PV Mandryka.

Following the resignation of Grachev's friendship did not stop, and of the supplier is often seen in the entourage of the former Defense Minister. So, in February 1998 in the Ryazan region Dyumin Grachev and got in an accident, which immediately classified. According to the official version, the ex-defense minister late at night going to visit the wife's mother, who lives in the village of Polyana. On the way, they picked up a stand in the roadside 33-year-old Elena Musatov, and after a few minutes of "Ford" skidded into a ditch and it flipped. As a result, a woman was killed, and Grachev and Dyumina with multiple injuries was taken to the intensive care unit.

Whether someone punished and where high-ranking passengers rushed, could not figure out in the middle of the night is incurred.

Another companion Dyumina Golubleva and until recently played a prominent lawyer and investor Dmitry Shumkov that in December last year unexpectedly committed suicide by hanging himself in his office in the tower "Federation". According to our source, "Shumkov quarreled with their business partners and friendly officials who helped him in the implementation of key development projects, and was in despair." In particular, the same sources indicate unsuccessful Shumkov purchase for $ 50 million, 91.5% of the shares of the sports complex "Olympic". Before the transaction businessman said that from the "Olympic" is going to make a second Madison Square Garden. However, the much-touted project proved unprofitable and the necessary funds for the reconstruction was not. Now, according to the information database "SPARK-Interfax", "Olympic" is headed by Artem Dyumin.

According to one version, was appointed acting Dyumina Governor because needed a reliable man on the liberated area. It is, first of all, not the appointment and resignation. According to "Gazeta.ru," referring to the sources, in Gruzdeva "is not a relationship" with the first deputy head of presidential administration Vyacheslav Volodin, in charge of domestic political unit.

"Kommersant" writes, it's all about "interests" in the region the head of the state corporation "Rostec" Chemezov. Although Dyumin - "is not a man Chemezov," it could be "a compromise figure between the Kremlin's interests and Chemezov," explained journalists.

Of the 85 regional heads of their income for the previous year have not publicly reported three. That did not make an appointment in February Acting Tula Region Governor Alexei Dyumin appointed acting Tver Region Governor Igor Rudenya and the governor of the Ulyanovsk region Sergey Morozov. RBC was unable to find former Dyumina returns and find out if he has previously made public their income.

A spokesman for the governor of the Ulyanovsk region in the afternoon on Tuesday, said that the declaration will be on site during the day. At the time of publication of this material has not happened. On Tuesday evening, he was unavailable for comment.