Andrew Komarov of 87% of the shares of CHTPZ Group 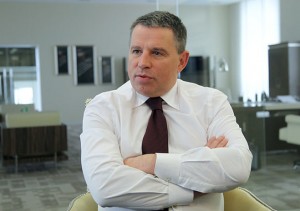 Read this text in Russian
Имя: Andrew
Фамилия : Komarov
Отчество : Ilyich
Должность : of 87% of the shares of CHTPZ Group

Andrey Ilyich Komarov (b. 11 Oct 1966, Chelyabinsk-40, USSR) — entrepreneur, owner of 87% of the shares of CHTPZ Group[1][2][3][4][5][6][7][8], a former member of the Federation Council, co-chair of the Fund development of the trumpet industry (FRTP), the ideologist of the corporate philosophy of "White metallurgy" and educational program "the Future of the White metallurgy".[9]

The actual address of her residence: 121069, Moscow, Malaya Nikitskaya street...

www.kompromatural.ru "Oligarch Komarov and his wife Levitan burst into "Bohemia". Communal shame and court games in the pipe billionaire family"

Skills of the talented administrator were useful when in 1992 Komarov left "Satiricon", having been engaged in purchase and sale of consumer goods. At the end of 1992 it was necessary to sell a batch of down jackets, and Komarov came to Krasnodar, where he met his future business partner Mikhail Gamzin, co-owner of a small company that was engaged in the supply of agricultural products abroad. "Andrei Ilyich was able to arrange so that the relationship with him quickly turned into a deal," recalls Gamzin. The first operation for the sale of down jackets for the currency took place just two weeks after meeting, and less than a year the partners founded and the first serious business of the North-Caucasian transportation company.

All the companies that own these assets — Golf courses, land, yacht clubs, buildings - used to be run by the same person. His name is Oleg Kustikov. Today, together with Viktor Khristenko, he is a member of the Executive Committee of the Golf Association of Russia, and in addition — the Board of Directors of the Chelyabinsk pipe rolling plant (CHTPZ).

Viktor Khristenko has a long-standing relationship with the CHTPZ group. First, the Board of Directors of the company included the son of Khristenko, Vladimir, which then raised questions in many media, because CHTPZ depended on the decisions of the Minister of industry.

And second, the main owner CHTPZ Andrei Komarov — countryman Viktor Khristenko (both from Chelyabinsk) and a longstanding familiar."Viktor Borisovich — my senior friend, we are from the same city, we are friends for many years, we have all sorts of connections — family, friends, whatever" - said Komarov in an interview with Forbes.Could these friendly and other "all sorts of connections" affect the price of transactions for the purchase of "Golf assets"?

But there is a plausible version of why Mosquitoes so easily has established itself on factory. According to some bankers, as well as competitors Komarov, his patron was Viktor Khristenko, in different years held the posts of Minister of energy, industry and even Deputy Prime Minister. In 1996 Khristenko worked as the first Deputy head of administration of Chelyabinsk region. Komarov claims, however, that by the time he became a shareholder of CHTPZ, the future Deputy Prime Minister had already left for Moscow (according to the official biography of Khristenko, this happened in 1997). Close acquaintance with Khristenko Komarov, however, does not deny: "Viktor Borisovich — my older friend, we are from the same city, we are friends for many years, we have all sorts of connections — family, friends, whatever." But Khristenko "is not and was not a co-owner of CHTPZ", he insists. Representatives of the ex-Minister from comments evaded.

Komarova (according to the Registrar of Cyprus, the owner of Mountrise is registered on BVI company Nendo Assets Limited).

Why did he do this to his company, which is experiencing acute problems with liquidity? "An ordinary story, preparing for an IPO... everything was done very correctly, on the basis of the average price," Komarov says reluctantly on this topic, he clearly does not like it. Interestingly, the ChTPZ group made two IPO attempts in the spring of 2011, that is, six months before the buyout, the plans for a new IPO are not yet known.

The main owner of the CHTPZ Andrei Komarov (he owns 90% of the Chelyabinsk pipe rolling plant) was detained in the evening on March 12 by the interior Ministry, the Ministry said. Businessman and his lawyer Alexander Shibanov is suspected of handing over a bribe of $300,000 to an official to hide the fact of violation of the law on mobilization preparation of enterprises, said in a statement the official representative of the TFR Vladimir Markin.

The Board of Directors of JSC "CHTPZ" includes 7 people:

1) Kiselev, O. V. (in parallel he is also Deputy Chairman of the management Board of LLC "Management company "RUSNANO", that is, to put it mildly, "a person close to Chubais»)

2) the main shareholder and oligarch Komarov A. I.

5) Fedorov A. A. (direct companion of oligarch Komarov)

Collective material dividends for participation in the work of the Board of Directors in 2015 amounted to 90 million 739 thousand rubles, a total of 13 million came to the nose. For the first quarter of 2016, each member of the above-mentioned "seven" has already had dividends of 2 million 800 thousand rubles.

Curly still living members of the management Board of JSC "CHTPZ", they are just bathing in dividends that fall on them like manna from heaven.

The Board of JSC "CHTPZ" has 8 people:

1) A. D. Grubman, General Director of JSC "CHTPZ" and the sole Executive body;

Here, for example, a certain Daria Fedorova, 1983 year of birth is a part of body of control of financial and economic activity of JSC- obural.ru assumes that the relative of the Chairman of Board of Directors of CHTPZ Alexander Fedorov. Her personal dividends for the past year is not frail – 3 million 355 thousand Yes, plus now Fedorova Daria received 2 million 725 thousand rubles.

gusev-a-v.livejournal.com Dear Novotrubniy! Wait till we get drunk! I wish you happiness and health! 29.08.2016

CHTPZ, including billionaire Komarov, many accuse of financing Navalny. Moreover, 'evil tongues' claim that it happens on behalf of the presidential administration - allegedly Mosquitoes at the request of Shkolov and Khristenko pays the opposition in return for the lack of interest from Guebipk and, in a sense, even their freedom.

So, suppose that Khristenko with Shkolova frees Komarov. Schools thus 'donates' two subordinates - Sugrobov and Kolesnikov. Naturally, after this for Komarov formed 'debt', which he regularly gives. Here only not to the patrons, and Fedor Krasheninnikov.

The latter allegedly provides information services to CHTPZ, for which he receives serious money. At the same time Krasheninnikov is a good friend of Leonid Volkov, the closest ally of Alexei Navalny. They wrote a book together and even argued with Putin as part of his 2012 election campaign.

The main question: why Shkolov and Khristenko pay Navalny? Rumor has it that the opposition acts in their interests, and therefore remains almost always unpunished. He prepared investigations against the defense Ministry when it was necessary to remove Serdyukov. He 'presses' all who could be named as Putin's successor - according to a number of versions, exactly as long as Volodin, AP and others will not pick up a suitable, which 'press' will not need. And then Alexey will be silent.

compromatbase.com "Andrei Komarov will roll billions of 'Gazprom' in the pipe" 2017g.

The story began as an ordinary household turmoil and developed something like this: the owner of the apartment in the center of Moscow by mistake made a flood and flooded the antique salon located on the floor below. Since the parties could not resolve the issue peacefully, the dispute was resolved by the court, in the territorial jurisdiction of which is located as a "bad apartment" and a shop with paintings and Antiques. As a result, Presnensky district court of the capital ordered the citizen Levitan to compensate for the damage caused to the salon of the company "Bohemia", and pay 43 million rubles. Later this verdict was confirmed by the Moscow city court…

Since the culprit of the flood was in no hurry to execute the judgment, the case was taken by the bailiffs. But to ensure the execution of the verdict they did not work. The story suddenly spun in an unexpected direction. The matter is that the citizen Anna Levitanskaya found guilty in a flood – not the usual inhabitant of the megapolis, and the spouse of the Chairman of Board of Directors of Chelyabinsk pipe rolling plant (CHTPZ) Andrey Komarov. This entrepreneur is known as one of the richest people in Russia (included in the list of "Forbes" with a fortune of 900 million dollars). Andrei Ilyich himself, as they say, passed the lights and water, having made a fortune in the 90s, as they say, with the support of his countryman — the former head of the Ministry of industry Viktor Khristenko, the wife of the current social Deputy Prime Minister Tatyana Golikova.

...So overnight the victim turned into the culprit, as LLC "Bohemia" was deprived of the opportunity to carry out economic activities, which leads to significant losses. Further, so-called "aggressive" the combination of twisted plan lawyer Kurmaeva, resulted in the prolongation of the proceedings, the endless examination with the involvement of new characters and heaps of new absurd circumstances.

It is clear that Kurmaev and his client couple Komarova-Levitan, most likely, deliberately delay the time to losses initiated by the Krasnodar court suspension of the activities of "Bohemia" led either to the ruin of Antiques, or to their agreement to abandon the claims against the wife of the head of the CHTPZ.

At the same time, the media reported that the Kremlin can replace the "looking" for the oligarch Komarov and his assets. According to this version, the other day, "Sverdlovsk oblast secretly visited the Director of the foreign intelligence Service, Selenarickes. Eyewitnesses say they saw him at the Golf at Pine Creek Golf Resort under the Sysert', the official was playing Golf accompanied by two armed employees of the FSO". The visit of such a high-ranking person immediately overgrown with rumors: it is believed that Naryshkin will become the new "curator" of the CHTPZ-PNTZ, replacing in this role no less respected President of the Russian Golf Association Viktor Khristenko, the husband of the long-lived power cabinets Tatyana Golikova. Earlier, the son of Khristenko led the above-mentioned "Rome" Komarov.