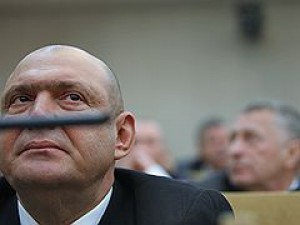 More clouds are gathering over the "right hand" oligarch Oleg Deripaska, a board member of OOO CPM "Transstroi" Arkady Sarkisyan. Eight months later, he does not respond to the agenda of the Interior Ministry and hiding abroad. As a result, in the near future investigators plan to decide about its attraction as a defendant in absentia. Following this will be followed by the arrest of correspondence and classified in the international search. According to investigators, namely Sargsyan organized theft of funds allocated for the construction of a third runway (runway) airport "Sheremetyevo". According to the Department of Transport the Interior Ministry in the Central Federal District, "Transstroi", which until recently was the main contractor for the works, using low-quality materials and documents designated them as materials of the highest class. As a result of the band came out not very good quality and the state in the face of Federal Air Transport Agency ( "the customer" works) serious material damage.

In 2011, the year "Transstroi" and its "subsidiaries" received gospodryady runway construction for a total of 26.2 billion rubles. However, already in 2014, lagging behind the schedule by "Transstroi" accounted for nearly one year, which was a disaster - the runway is to be built to the beginning of the World Cup in 2018. Moreover, the "customer" is not satisfied with the quality of work.

In 2015, the Federal Air Transport Agency stopped funding construction fell recriminations. As a result of the contract with "Transstroy" was canceled, and instructed to complete the runway of "TSM", controlled by brothers Rothenberg.

And after the light appeared a case of embezzlement. excavation were conducted in three companies, who carried out the construction of the strip until the spring of 2015 - LLC "HMS-Region", LLC "Transstroi" and CJSC "ETS". Also during interrogations I have visited many top managers "Transstroi" but the investigators did not hide the fact that their main goal is to Sargsyan. However, he chose to leave Russia as soon as possible and still have not returned back.

Back in the 1990s, the former partner Oleg Deripaska, while - the co-owner and CEO of the Sayan Aluminum Plant (SaAZ), offered the young businessman assistant Arkady Sarkisyan - a person associated with the security forces of Khakassia, where the SaAZ. Sargsyan became an active participant in the criminal SaAZ warrior around, and then several other companies Deripaska included later in holdings "Siberian Aluminum" and "Russian Aluminium". However, later in graduate Nakhimov Naval College, in 1976-1994 gg. served in the Baltic Fleet, leaped political ambitions. He wanted to become a member of the Federation Council. With some difficulty managed to persuade Alexei Lebed, the head of government of Khakassia, to nominate the former head of security of SAP from the Supreme Council of the Republic. But, becoming a senator, Sargsyan doing anything but not the legislative work in the upper house of the Russian parliament. At the meetings it could see no more than once per quarter. And such behavior is, of course, did not go unnoticed by the Federation Council leadership. Last year, the patience of Sergei Mironov, chairman of the upper house ran out, and at his initiative Arkady Sarkisyan was withdrawn from the senators.

From this point Arkady Sarkisyan started to behave more adequately. In particular, he tried to write a letter to the Prosecutor General to institute criminal case against Mironov for alleged "arbitrary" and "abuse of authority". Moreover, the statement - for respectability - was written on the letterhead of the Group "Basic Element".

To Sargsyan little "cool" was sent to Israel, but on returning he was already ready to place a deputy of the State Duma on the LDPR. From 2007 to 2011, Sarkisian was a parliamentarian.

And in 2011, Oleg Deripaska Sargsyan appointed curator of its construction sector, which includes "Glavstroy", "Bazeltsement" and "Transstroi".