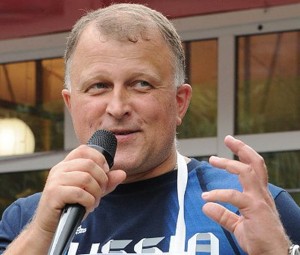 In 2001 he graduated from the Moscow State Social University with a degree in law.

Service in the internal affairs began in 1995, security officer of the Regional Directorate for Combating Organized Crime yu at Moscow Police.

Since October 2006, he served in the Main Directorate of Internal Security of the Russian Ministry of Internal Affairs.

In December 2012 he was appointed Deputy Minister of Internal Affairs in the Republic of Bashkortostan.

In 2014-2015 he held the posts of Deputy, First Deputy Head of the Main Directorate for Economic Security and Anti-Corruption of the Russian Ministry of Internal Affairs.

By the Decree of the President of the Russian Federation No. 657 of December 23, 2015, he was appointed head of the Main Directorate for Economic Security and Anti-Corruption of the Russian Ministry of Internal Affairs.

He has state and departmental awards.

"For failure to take due measures to strengthen the official discipline and legality in the entrusted unit, the head of GUEBC and Andrei Kurnosenko was disciplined in the form of a warning of incomplete service compliance," she noted.

The third week in the GUEBiPK Ministry of Internal Affairs is a large-scale check in the criminal case, initiated against the former head of the "T" Directorate, Colonel Dmitry Zakharchenko.The policeman was detained for a bribe of 7 million rubles, but during the search of his relatives' apartment, cash in rubles and currency was found almost 9 billion rubles, and in his car another 13 million rubles, 170 thousand dollars and 5 thousand euros. The policeman himself could not explain the origin of the wealth, and the investigators believe that he actively "twisted" in the fuel and energy sector and the shadow banking business. Now Zakharchenko is sitting in jail under investigation.

The inspector was also visited by the head of the GUEB & PK, 47-year-old general Andrei Kurnosenko. The fact is that on the day of Zakharchenko's searches at home and at work, the head of the anti-corruption command post suddenly turned out to be on a business trip. They say that he flew abroad. The Chekists doubt the coincidence, because Kurnosenko is from GUSB. Probably, his former colleagues warned him of the special operation he was carrying out. The general himself also suspected something: the sources of Life in the Ministry of Internal Affairs say that as early as September 9, he put a report on his resignation on the table of his chief Vladimir Kolokoltsov, but he has not yet signed. The fate of the general will be decided upon the results of the inspection of his unit, but not in the Ministry of Internal Affairs, but in the presidential administration.

Now the operatives of the M Office of the FSB had even more suspicions and questions about Kurnosenko. During the check, the general found assets worth hundreds of millions of rubles. As it turned out, until recently he was the owner of expensive mansions and land in the prestigious Istra and Krasnogorsk districts of the Moscow region - worth about 160 million rubles.

Meanwhile, law enforcement officials say that the scandal with Dmitry Zakharchenko may lead to the analysis of flights in the central apparatus of the police department. According to some reports, some already planned appointments to senior positions in the criminal police service (which includes the GUEBC and the Police) may be suspended or canceled, according to media reports, the head of this anti-corruption chapter, Major-General of Police Andrei Kurnosenko, allegedly filed a resignation report, which according to the law "On the police" is responsible for the unseemly actions of their subordinates.

Immediately after Zakharchenko's arrest, his direct leader, the head of the GUEBiPK of the Ministry of Internal Affairs Andrei Kurnosenko, resigned. However, soon the command "release" arrived. The head of the National Guard Viktor Zolotov personally worked for the general.

- In the Istra district he owned four land plots with a total area of ​​5 thousand square meters. m, as well as a mansion, "a source in the special services told Layf.

The largest area of ​​1.5 thousand square meters. m in Kurnosenko was in the village of Turovo in the Istra district. Its approximate cost is estimated at 10 million rubles. In the same village Kurnosenko owned three more plots and a mansion.

In November 2015, Kurnosenko, who was then the first deputy head of the central committee, got rid of most of his assets. As it turned out, at this time he was already preparing for the appointment to the post of the head of the GUEBiPK.

Judging by the declaration of the general on incomes and expenditures in recent years, he and his family did not shine with special wealth. In the last declaration, he pointed out that in 2015 he owned two land plots in the territory of Russia with an area of ​​1,500 and 610 square meters. m, a house at 192 "square" and a garage. In use Kurnosenko has two apartments for 117 and 64 square meters. m and economic building. The general does not have a car, and he earned a little less than 2 million rubles a year. Similar declarations, he filed for 2014 and 2013 years.

Knowledgeable people say that they can not earn such wealth with honest service in the Ministry of Internal Affairs.

Specialists studying the profile market of activities of "Peton" noticed that they had a sharp breakthrough for the period when Ali Uzdenov was appointed vice-president of Bashneft. Moreover, Hasanov and Polyakov have quite influential relatives in the power structures who have received leadership positions in the GUEBiPK of the Ministry of the Interior of Russia, informs comandir.com.Among them was Andrei Kurnosenko who, a year after the fulfillment of the duties of the deputy GUEBiPK of the Ministry of Internal Affairs of the Russian Federation, took over the post of its head.

In September 2015, the former head of the Ural Mask of the Bashkortostan Vladislav Gorkavtsev was appointed deputy Kurnosenko in GUEBiPK. Moreover, a whole group of policemen came to the capital of their Bashkiria, who after a while occupied all sorts of managerial positions.

Among the influential friends included a friend of Kurnosenko named Uvarov, who was appointed to the position of the head of the "gas department" GUEBiPK of the Ministry of the Interior.

To receive orders from Gazprom and other state-owned companies helps Peton Andrey Kurnomenko and GUEBiPK. Basically, state orders are won through tenders by holding a competition where several companies compete for the right to supply any goods, perform work or provide services, but in reality communication plays a big role and, of course, the ability to use them. This can be seen in the example of the Bashkir company "Peton" reports compromat.ru.

Doubtful personalities who are beneficiaries are NIPI NG "Peeton", reports www.piterburger.ru. He is represented by the brothers Dmitry and Oleg Polyakov who were already accused of hooliganism, raider attacks, fraud and other crimes. But the brothers got away with it. And here it could not do without ties with the security forces. So, "Peton" got access to the orders of "Gazprom" thanks to the deputy head of the GUEBC and Andrei Kurnosenko out of competition. This allowed the brothers Polyakov, their friends, as well as the brothers Marif Eduard Gasanov, to master about 175 billion rubles. Rubles of the Russian giant.

"... No one wanted to fall under the" tank "and Andrianova Kurnosenko. And when "Peton", "surviving" the middle peasants, was already entrenched in Gazprom's contractors, they even began to give him contracts (worth 170 billion rubles) without contests.

All this, at times, leads to disastrous situations in regions with employment of the population. For example, OOO Yugorskremstroygaz, having lost almost all the contracts with Gazprom, is forced to fire 400 employees who are already holding pickets. And because of the actions of the Kurnosenko team and tax officials who want to clear the way to Peton, dozens of proven contractors have been removed from receiving Gazprom money. All of them are now mass reductions of employees. "