The Russian mafia and the Moscow authorities. Part two. 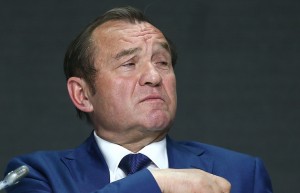 rucriminal.info continues the publication of an investigation on the ties between the Moscow authorities and the mafia. Annually from the city budget billions of rubles go to the company "Mercator", which owns the "right hand" of the authority of Semen Mogilevich (Don Simeon) Stanislav Nikolaev. The latter is a member of the government of Moscow and the GBU Avtodor. In the first part of the investigation rucriminal.info told that for money laundering Mogilevich created dozens of firms in different countries, through which hundreds of millions, if not billions of dollars, passed. Among them, for example, were the companies "EM Consulting GmbH" and "British European Marketing Ltd". In the first firm, Nikolaev headed a representative office in the USSR, and in the second he was a president. "British European Marketing Ltd" "lit up" in the decision of the Pennsylvania court in the case "The United States against Mogilevich." The documents say that the company headed by Nikolayev was registered in Cardiff (Wales) as Mogilevich's close associates and needed another money-laundering fund in London, Don Simeon-UNITED TRADE.

The main chip of the washing net of Mogilevich and Nikolayev was the use of many companies registered in different countries, but having the same name - "Arigon ltd". The main one was the Hungarian "Arigon ltd", in which, according to the report of the FBI "Eurasian organized criminal organization of Semyon Mogilevich," Stanislav Nikolayev was president.

Also for money laundering Mogilevich, the company "YBM" was created with Vice-President Stanislav Nikolaev. This structure laundered money under the guise of investment investments and even exhibited its shares on the stock exchange.

On May 13, 1998, four US intelligence services - the FBI, the Internal Revenue Service, the Customs Service, the Immigration and Naturalization Service - searched and seized documents at the YBM office in Pennsylvania. It was announced that all the work of "YBM" is just a scheme for laundering money. In September 1998, a fine of $ 3 million was imposed on the company. It was paid, but on May 31, 1999 a criminal case was opened against the management of YBM.

According to the investigators, in the reports of "YBM", the real number and amount of the transactions conducted were intentionally overstated. Consequently, the company's capitalization increased artificially. Initially, it was clear that investing money in magnet trade and oil refining, it is impossible to make a profit of 200% per annum. Such funds could be earned only by laundering money and engaging in other criminal activities. In fact, no one deceived investors - they bought shares of the giant "laundry" and received income from its activities. Officially, the same profit was made out, as received from a deal with magnets.

As soon as the scent of arrests, Mogilevich and his "right hands" Stanislav Nikolaev hastily moved from the US, Canada and Europe to Russia. They did it for good reason. Mogilevich was later put on the wanted list by the Interpol line. And Nikolaev's surname certainly appears in all the FBI's materials regarding Mogilevich and in Interpol's reports.

In addition to the already quoted materials of the Western special services concerning Nikolaev, I would like to show readers a number of others. For example, this: "The US FBI identified at least 10 important accomplices of S. Mogilevich and related companies active in Ukraine: Sergei Maximov (Vabank) ... .. Stanislav Nikolayev, Vladimir Eremenko (" YBM Mangex Ink. " ), Igor Pluzhnikov (Baltschug LTD, Business Cooperation Foundation "Ukraine") ... ".

And here is an excerpt from Interpol's "Millennium" report on the activities around the world of Solntsevo OPG: "In Budapest, the Arigon company was founded. Its president was Stanislav NIKOLAEV (1). The owner was Galina GRIGORIEVA, the former wife of Mogilevich. The partners were Alexey ALEXANDROV and Anatoly KULACHENKO. This company was closed in 1996 and replaced by the company "United Trade" in Budapest.

NIKOLAEV Stanislav Grigorievich was born on February 19, 1951 in the Ukraine. In Zurich, he presented a Greek passport in the name of Stanislav NIKOLAIDIS. (Interpol General Secretariat / Meeting of the Swiss Working Group 18-19 / 06/02) ".

Having fled to Russia, Semyon Mogilevich made a bid on two of his trusted associates, the natives of Donetsk - Vladimir Nekrasov and Stanislav Nikolaev. First, as a top manager, he managed the structure of Don Simeon Arbat Prestige. And the second, in the same capacity, "ruled" the company Mogilevich "Mercator". The history of Arbat Prestige and Nekrasov is well known. Nekrasov, along with his boss Mogilevich (who changed his name and surname to Sergei Schneider) were arrested for non-payment of taxes. However, then both went free.

But Nikolayev has so far successfully escaped landings and continues to "serve the truth" to serve Mogilevich and Solntsevsky. Sergei Mikhailov at one time even was a co-owner of the Mercator. By and large, the current "Mercator" is the second "Arigon" - at the moment the main source of replenishment of pockets for the Solntsevo brotherhood and the team of Mogilevich. A kind obshchak, which regularly replenished with huge amounts. Only replenish it is not the "brothers" and the roofed merchants, but the authorities.

In the "Mercator" for a long time pumped into a huge amount of budgetary funds, primarily the funds of the Government of Moscow. It began when I was still the mayor of Yuri Luzhkov. However, after his resignation the situation did not change. Firstly, the person from the "Luzhkov team" - the current deputy mayor Petr Biryukov - is closely connected with the "Mercator". There is a "Mercator" and another "guardian angel." This is the head of the Moscow City Administration "Roads" Alexander Oreshkin. The latter generally does not bother, the interests of the "Mercator" he lobbies almost openly. He could not be stopped by the FAS investigation into Oreshkin's candid forgery when holding auctions in favor of Mercator. None of the arbitration proceedings, where it was explicitly stated that in the auctions held, the characteristics of the equipment are set such that no one can become a supplier except the "Mercator".