At the head of the smuggling schemes rose lawyer Anatoly Bernstein 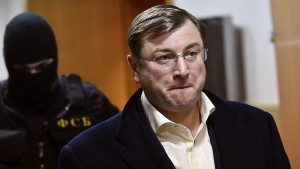 In spring and summer we all watched the high-profile arrests and revelations "shadow customs schemes" of St. Petersburg. One of the most prominent defendants - now arrested Dmitry Mihalchenko accused of smuggling and embezzlement of budget funds. Along with him in the press mentioned many names, most of them were arrested, but no lawyer Anatoly Bernstein.

An experienced lawyer, a successful lawyer is a longtime business partner arrested Mihalnichenko. He has worked on legal issues of Forum since 2012, which he said in an interview lifenews78. (Https://life.ru/t/life78/190510)

This company's law enforcement agencies have accumulated a lot of questions. RBC recently published a scheme by which hid millions of dollars in fees and organized smuggling channel is still in effect. (Http://www.rbc.ru/business/25/07/2016/5780e7819a7947ddcaae48a9) Searches in the company, special forces and withholding goods in recent years become common practice for them.

In the absence of the former boss and colleagues with imprisonment major smuggling, Anatoly now controls the above-described scheme and, according to the inner circle "felt on the head crown and enthusiastically divide and rule".

Here's another interesting fact. As reported "Fontanka", on the eve of the Victory Day near the metro station "Ploshchad Lenina" private collection of vintage war and pre-war cars, weapons, military objects was exhibited. One of a kind. Expensive and absolutely exclusive. Owned by none other than Anatoly Bernstein, who unabashedly himself conducts free "Lenrezerva" tours throughout the exhibition for all comers.

According to experts, the maintenance of the rarity of mobile technology on the go - and that's what is so proud author of the collection - is quite expensive! And here's what happens: a lawyer, known for its activities and cooperation with the Turkish company ULS Global, implicated in a number of customs scandal, flaunting a unique multi-million dollar collection. According to Bernstein, the creation of the collection of his personal earnings went even 90s. However, this version only raises a smile.

I should add that this exhibition was opened with the assistance of Research Affairs of Russia in St. Petersburg and Leningrad region. Anatoly opened the exhibition in person, together with the head of this department Sergei Umnov. Curiously, this is not the first project of Bernstein's "Lenrezerva" and the St. Petersburg police, indicating that the long-standing friendship between the two men.