Member of the Board of Directors of NIPI NG "Peaton"

Co-owner and member of the Board of Directors of SMP Bank... 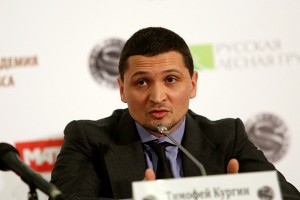 Biography:
In the 90 years, Kurgin first "lit up", as a figurant of the criminal case. Cases of murder. And not someone, but a deputy of the State Duma. In those days, Timofei Kurgin was known in certain circles, like Timur or Teimuraz.
In 1991, he was a silver medalist of the Russian championship among younger boys.
The president LLC "Boxing Academy", President of the National Association of Timber "Russian forest". Owls ladelets enterprise "Russian Timber Group" (49%). Shareholder of the company "Mosselprom Domodedovo". Founder of the Foundation "Orthodoxy" (excluded from the Unified State Register of Legal Entities on July 8, 2011)
He is married and has three sons.

However, the authoritative businessman Kurgin has two biographies. One by one, Timofei Kurgin is a prominent Russian businessman, co-founder of the "Academy of Boxing" and president of the "National Association of Timber Industry". However, to create such an image, he had to make a lot of efforts: in particular, he convinced Yandex to clean up his past, using the right to oblivion. But many still remember that Timofey, and then still Teimuraz or Timur Kurgin literally miraculously escaped punishment for the murder in 1995 of State Duma deputy Sergei Skorochkin. From that moment, the second biography of Kurgin begins.
RUCRIMINAL. com, 28.09.2016

It became known that Timofei Kurgina is suspected of having links with the leadership of the state corporation Rostekh. The Moscow regional prosecutor's office has established that the murder of Skorochkin was organized by the criminal authority from the Moscow region Oleg Lipkin. The deputy was kidnapped in a bar, tortured, taken to the forest and killed. The reason was allegedly money that the familiar businessman owed and did not want to give to the deputy. In the abduction of Skorochkin from the bar, prosecutors established, the son of the former head of the Ramensky OVD inquiry department, Teimuraz Kurgin, participated.
As Version writes, Kurgin spent several years in prison. He was justified several times by a jury. As a result, in 2005 the case was closed for a long time ago. Kurgin managed to get close to the leaders of the Russian underworld during this time. In particular, he was sitting in a cell with Shakro Young for a while, and he wanted to even crown him as a thief in law. But Kurgin also had another patron, now the late head of the Orekhovo OPG, Sergei Timofeev, better known as Sylvester. And it seems that it was Sylvester who advised the young criminal not to go deep into the underworld, but to engage in legal business. Apparently, Timofei Kurgin advised the council, refused to be crowned, and after liberation he began to live the life of an honest man. However, it became known, writes Anticor1, that Timofei Kurgina is suspected of having links with the leadership of the state corporation Rostek, which supports some initiatives of the co-founder of the Boxing Academy.
RIA Arbitrator, January 9, 2017

In more narrow circles, Kurgin is known by the "chase" - Teimuraz. In general, Kurgin is a former boxer (an archival copy), close to another "odious" entrepreneurs to the brothers Ananyev, who finance a number of his projects. Only "Promsvyazbank" gives Teimuraz loans.
Curgin is also known as a professional "decided". Rumor has it that he mainly deals with "solving the problems" of Mr. Warsaw, but sometimes "helps" other partners. Allegedly, Teimuraz uses his rich experience of "force solving issues", accumulated in the "dashing 1990s".
Sir, or rather, authority, Kurgin is known in the field of business, although he does not forget about sports (in particular, about boxing). After he became co-founder of the "Academy of Boxing", Kurgin gained more and more of the connections he needed.
«The Moscow Post», 08.08.2016

The thing is that different VIP-persons train in this "Academy". For example, member of the Board of Directors of Gazprombank Andrey Chernogorov and the general director of the state JSC "Federal corporation for the development of small and medium-sized businesses" Alexander Braverman (archive link), who previously for a long time was the general director of the Federal Fund for the Promotion of Housing Construction.
Friendship with Chemezov
Besides Timothy Kurgina suspected of having links with the leadership of the State Corporation d 'Rostec ", which supports a number of initiatives co-founder of' Boxing Academy."
For example, in December 2015, Kurgin was the organizer of the event, when the legendary American boxer Floyd Mayweather arranged an open training session directly in the "Russia" concert hall. So in the organization of this event participated "Russian Forest Group", whose shareholder is Kurgin, and the state corporation "Rostekh".
In a number of Internet resources it is said that the head of "Rosteha" Sergei Chemezov is the president of the "Boxing Academy" and the master of sports in boxing (archival reference). His son won the open championship by the force of impact in his age category.
Of course, with the support of Sergei Chemezov himself, Timofey Kurgin can easily resolve issues related not only to sports, but also to business. By the way, for the president of the National Association of Lumbermen, boxing and business have always been connected.
Compromising. net, 29.06.2016

American boxer Floyd Mayweather Jr could become a co-owner of a network of wholesale and distribution centers (CRC) "Four Seasons", owned by businessman Timofeyu Kurginu and Ananiev brothers, and eventually become their partner even in the forestry business. The future partners announced their plans for joint business on December 3, 2015 at a press conference in Moscow (Kurgin was the organizer of Mayweather's visit to the Russian capital), but then they did not disclose details. As told by RBC Timothy Kurgin, Mayweather intends to buy 10-25% of the "Four Seasons" for $ 20-50 million, based on an asset valuation of $ 200 million.
RBC, 02/03/2016

Difficult times have come for the former State Duma deputy Vadim Varshavsky, who controls the Estar group. At the end of March 2016 it became known that the representatives of Rostenadzor, Rosprirodnadzor, Rospotrebnadzor and the government of the Rostov region "took up arms" at Varshavsky.
However, it seems that Warsaw has acquired a lobbyist in the banking sector. In particular, the media said that the representative of Vadim Varshavsky in the banking community is Timofei (Teimuraz) Kurgin (archival link) - a former boxer, akin to the brothers Ananyev, who controls "Promsvyazbank."
In fact, Mr. Kurgin plays the role of "shredder" under the Warsaw. By the way, Mr. Kurgina quite developed "persuasion", as he had previously engaged in professional boxing and in the "dashing ninetieth" used "power IU Toda" to solve their problems.
«The Moscow Post», 12.04.2016

According to some experts, up to ten percent of the main super-profitable branches of business, one way or another, had to do with Kalashov and his people. The business of the legal, of course, writes "Version."
It is enough to recall the recent history of the metallurgical company Mechel, where the workers did not receive their salaries for months. We note that this is one of the world's largest mining and metallurgical companies, uniting 66 thousand people. It went so far that President Vladimir Putin had to intervene in the situation.
What was going on at Mechel could have been related to Vadim Varshavsky, a well-known businessman with a dubious reputation, a former deputy and co-owner of the Estar Group, which in 2008-2009 owned a number of metallurgical enterprises in the Urals, including Mechel . The strategic enterprise was on the verge of bankruptcy, which was prevented only by the personal interference of the country's leadership.
In 2016, when Varshavsky was threatened with bankruptcy, Timofei Kurgin, an authorized person of Promsvyazbank, rescued him. He and the brothers Ananyevs (owners of Promsvyazbank) own two wholesale distribution centers (ORC - Four Seasons) in the Moscow region for a long-term storage of food products, with a capacity of more than 1.5 million tons per year each.
These ORCs are on the balance sheet of Finance Invest LLC, which belongs to three founders: 47.17% from Cyprus Iontis Investments and Contirta Holding, 5.66% from the Russian Terra Invest. All three owners of Finance Invest are owned by another Cypriot company, Jakardis Holdings, which, in turn, owns Saltinnes from the British Virgin Islands.
According to the newspaper "Version", Timofey Kurgin argues that "Four Seasons" on a parity basis belong to him and "Promsvyazkapitalu" Alexei and Dmitry Ananyev.
On some information resources, Kurgin is listed as the general director of Finance Invest. In addition, he is still a shareholder of Mosselprom-Domodedovo. In 2014, Ananjevs and Kurgin purchased the Finance Invest company from the structures of the OFC Bank, which managed to build two warehouse complexes at 43,000 square meters in a 19-hectare site near Moscow. M. The new owners registered for the project management company "Mosselprom-Domodedovo" and increased the area of the land to 30 hectares.
"Curved mirror", September 16, 2016

It is noteworthy that one of the leaders of another monopolist - the company "Food City" billionaires of the Year of Nisanova and Zara Iliev, is none other than Kurgin's old friend Shakro Young. Well, this topic takes us to the scandal with the vegetable store "Biryulyovo", after which the market is being redistributed to this day.
And Timofey Kurgin is a shareholder of Mosselprom-Domodedovo. In February 2014, Kurgin and his partners purchased the company Financeinvest from the structures of the OFC Bank, which managed to build two warehouse complexes at 43,000 square meters in a 19-hectare site near Moscow. The new owners registered a management company "Mosselprom-Domodedovo" under the project and increased the area of the land plot to 30 hectares.
In the intricacies of relationships between representatives of big business, government bodies and criminal authorities, Senator Sergei Lisovsky, representing the interests of all the above-mentioned parties, plays an important role.
ROSBALT, November 14, 2016

Sergei Lisovsky is a deputy, senator of the SF, a member of the party "United Russia". He conducts successful entrepreneurial activity. It's hard to believe that he achieved such heights in business and politics without any help. The threads from the senator reached out to the criminal world when law enforcers began to investigate the case of Colonel-billionaire Dmitry Zakharchenko.
...
Further more. Sergei Lisovsky begins to "grow" influential patrons. He carries out their assignments, and in return receives the necessary benefits. It is believed that one of the hosts of the "Fox" was Timothy Kurgin, along with the brothers Ananievs. Recall that they have a common business - distribution center "Four Seasons".
During the investigation of the case Zakharchenko "strings stretched" straight to Senator Lisovsky. The links of one chain also turned out to be Shakro Young, Denis Nikandrov, Timofey Kurgin and Vadim Varshavsky.
«Political Russia», November 14, 2016